Learn more about the coffees of Hawaii

A Brief History of Coffee in Hawaii

Coffee originated in the highlands of Ethiopia, where its beans were originally chewed rather than infused for their invigorating effects (remember Kaldi the goat herder?). It spread into the Islamic world during the 15th century, where it was embraced as an alternative to alcohol, which was forbidden to Muslims. Coffee became regarded as the antithesis of alcoholic drinks, sobering rather than intoxicating, stimulating mental activity and heightening perception rather than dulling the senses. This reputation accompanied coffee as it spread into Western Europe during the 17th century, as a medicine and a social drink. 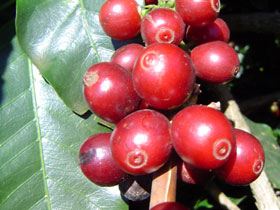 The history of coffee in Hawaii is bold and rich. During 1813, Don Francisco de Paula y Marin, Spanish advisor to King Kamehameha I, first introduced coffee to Hawaii. The popularity of coffee houses in London, also led Chief Boki, Governor of the island of Oahu, to discover coffee during a diplomatic mission to England’s King George VI in 1823. It was Chief Boki’s successful Manoa Valley coffee orchard that became the source for the first Kona Coffee. Reverend Samuel Ruggles took cuttings and planted them near Napo’opo’o in South Kona. The new “Kanaka Koppe” (Hawaiian Coffee) quickly received global acclaim. It was during 1830’s that coffee became a commercial crop in the Hawaiian Islands, with production on Kauai, Oahu and Kona.

Hanalei Valley on the North Shore of Kauai was home to the first coffee plantation in Hawaii, established in 1842. Later the initial Hawaiian Coffee variety was replaced by Guatemalan variety deemed Meleken Koppe (American coffee). Often called “Kona Typica,” this Guatemalan variety has become the standard for today’s Kona’s coffee industry. In the late 1800’s efforts to establish coffee farms were defeated by economics, drought and labor shortages. Eventually statewide farms were replaced by pineapple and sugarcane plantations and only small family farms in Kona were able to survive.

Hawaii’s ideal environmental growing conditions such as deep volcanic soils, cooling trade winds, elevation, sunshine and cloud cover lead to the production of the finest quality coffee in the world. Hawaiian coffees are exclusively of the Arabica species, with varieties including the heirloom Kona Typica, Bourbon, Red and Yellow Catuai, Yellow Caturra, Mokka, to name a few.

On each island, farms produce a range of unique taste profiles due to different microclimates, agronomic practices and processing methods. By far, Hawaiian coffees are the most diverse and dynamic coffees in the world, providing a rainbow of flavors to enjoy.